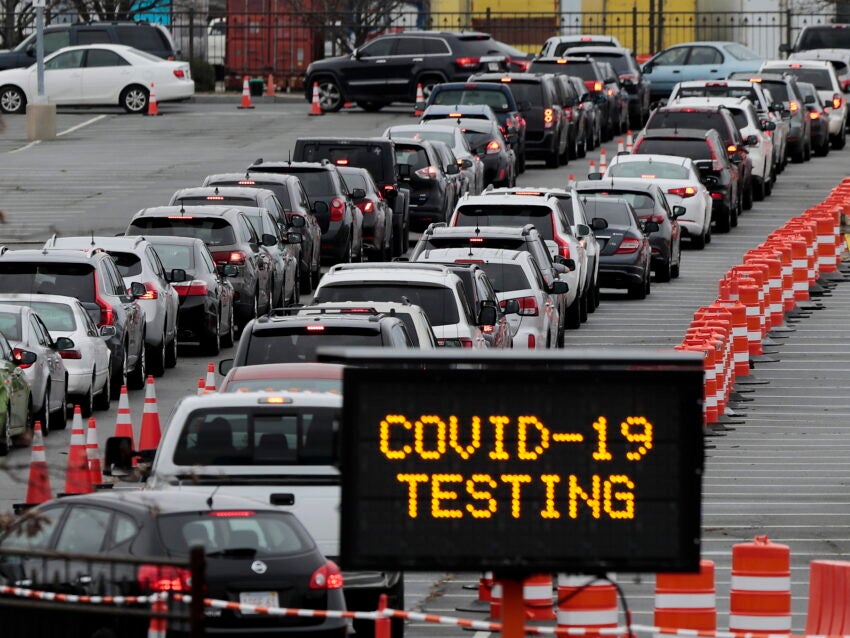 The number of coronavirus variant cases is rising in Massachusetts, and local experts are warning that quick action is needed to prevent a surge in infections.

Of particular concern is the increase in cases of the P.1 variant, first detected in Brazil. Massachusetts is one of the states seeing the highest number of cases (82), following only behind Florida (84), according to the latest data from the Centers for Disease Control and Prevention.

At least 50 of the P.1 cases in Massachusetts have been detected in Barnstable County.

As of Wednesday, the state has also identified 977 cases of the B.1.1.7 variant, first detected in the United Kingdom, and 12 cases of the B.1.351 variant, initially found in South Africa, according to the CDC. Still, new data from the Broad Institute of MIT and Harvard revealed that less than a month from the first detected P.1 case in Massachusetts, the variant had spread faster than any of the other virus strains in the Bay State.

Looking more broadly at the COVID-19 trends in Massachusetts, which has seen its cases, hospitalizations, and percent positivity rising, Samuel Scarpino, an assistant professor in the Network Science Institute at Northeastern University and the director of Emergent Epidemics Lab, said he’s concerned about the position the state is in. He worries the state is heading into a potential surge before getting to the level of safety needed through vaccinations and the benefits of warmer weather, which is why he and others have cautioned against a speedy reopening plan for Massachusetts.

The epidemiologist said the reason for the rise in cases in Massachusetts is not necessarily the P.1 variant, rather it is likely the B.1.1.7 strain propelling the increase.

“It’s going to require even higher levels of vaccination coverage to get to any kind of herd immunity, and it also means that it’s going to spread faster than we’re used to seeing,” Scarpino told Boston.com.

The challenge Massachusetts and most of the United States faces when it comes to the variants is a lack of systematic surveillance for the virus strains. So when looking at the cluster of cases identified on the Cape, the question remains whether Massachusetts really does have some of the highest levels of the P.1 variant — or whether the state has just been able to catch it first.

Ultimately, what matters is what happens next, Scarpino said.

“The response needs to be pretty aggressive,” he said. “We saw basically a month earlier this time last year with the Biogen superspreading event how one event that leads to 50, 60 cases then becomes 500 cases and 1,000 and tens of thousands of cases. So that’s the real concern. Not necessarily whether or not we have the most or not. But given that we’ve found it, we now have an opportunity to intervene with public health measures — test, trace, isolate, limits on indoor gatherings, etc. — to try and prevent this from becoming a massive surge.”

Researchers are still actively investigating what the potential implications are of the P.1 variant, Scarapino said, but so far laboratory studies are suggesting the vaccines aren’t as effective against it. There is also research that has not yet been peer-reviewed that suggests the variant is more infectious than the B.1.1.7 strain, he said.

“For me, the take-home message is nothing is settled yet,” the epidemiologist said. “But the signs point towards this being a very concerning variant that we should take seriously and do everything we can to prevent it from spreading.”

For the B.1.1.7 variant, because it has become prevalent in more than a few areas, there have been a few studies that indicate the COVID-19 vaccines are just as effective against the strain as they are against the previous version of the virus, meaning individuals who have been vaccinated are still “pretty safe,” Scarpino said. But people can still get infected even after being vaccinated and potentially transmit the infection to others, which means individuals should continue to take into account the health and vaccination status of those in their household.

With the variants like B.1.1.7 and P.1, what is important for unvaccinated individuals to remember is that activities that may have been safe before are now not as much because people may be more infectious with the variants, the epidemiologist said. The public should be much more aware of wearing masks, of the ventilation in the spaces visited, and try to keep indoor gatherings outside your bubble “to a minimum.”

“The COVID rates now are what they were in mid-November,” Scarpino said. “That means that the risk was high before we had the variants here, and now it’s much higher because of the fact that these [variants] are more transmissible.”

While the Northeastern professor said he thinks urgent action should be taken to address the rising variants in Massachusetts, he suspects officials are not going to walk back the state’s reopening decisions “absent a really spectacular rise in cases.”

That reality is unfortunate, since when it comes to epidemics, acting early is always better than acting late, Scarpino said. That’s why he and others were opposed to the way Massachusetts reopened.

“Part of the reason we’ve been in this mess for a year is because we wait until it’s too late and then we do something,” he said. “But assuming we’re not talking about rolling back indoor dining, sporting events, limits on gatherings, all those kinds of things, then I think we need to do everything we can to safely and efficiently accelerate the vaccination timelines.”

Massachusetts is behind its neighbors in opening up vaccine eligibility to individuals 16 years old and up. Residents under the age of 55 who haven’t already been prioritized for the vaccine will be allowed to start getting shots starting April 19, unlike surrounding states which have already opened up access to that group.

Doing so is particularly important, according to Scarpino, because Massachusetts is seeing a lot of cases among younger age groups right now. The professor said he hopes Gov. Charlie Baker and his administration are “taking a hard look” at moving up the eligibility timeline.

“We are close to something that looks a little bit more normal, we’re just not there yet,” he said. “And the more seriously we take the measures now, the faster and safer we’re going to get out of this. So if people hold off on indoor gatherings, if they are very judicious with their time indoors with people not in their bubble, they’re very thoughtful and careful around mask-wearing, wearing high-filtration masks, double masking, that’s going to get us out of this faster.”

It is also critical that anyone who participated in holiday gatherings over the weekend get a COVID-19 test as soon as possible to avoid potentially spreading the virus to others.

Doing so is essential to preventing another holiday surge, the threat of which has only been made worse by the growing presence of the variants, Scarpino said.

“We need to take these variants incredibly seriously, much more seriously than we’re doing now,” he said. “Otherwise we’re putting at risk our return to any sense of normalcy. And I personally think that would be tragic and unacceptable because we’re so close. We really just need a few more weeks of people really being careful, very careful and judicious around indoor gatherings, as we get more people vaccinated.”

There is a light at the end of the tunnel, Scarpino said, the length of the tunnel depends on the actions of individuals and officials over the next month.

Sign up and receive coronavirus news and breaking updates, from our newsroom to your inbox.