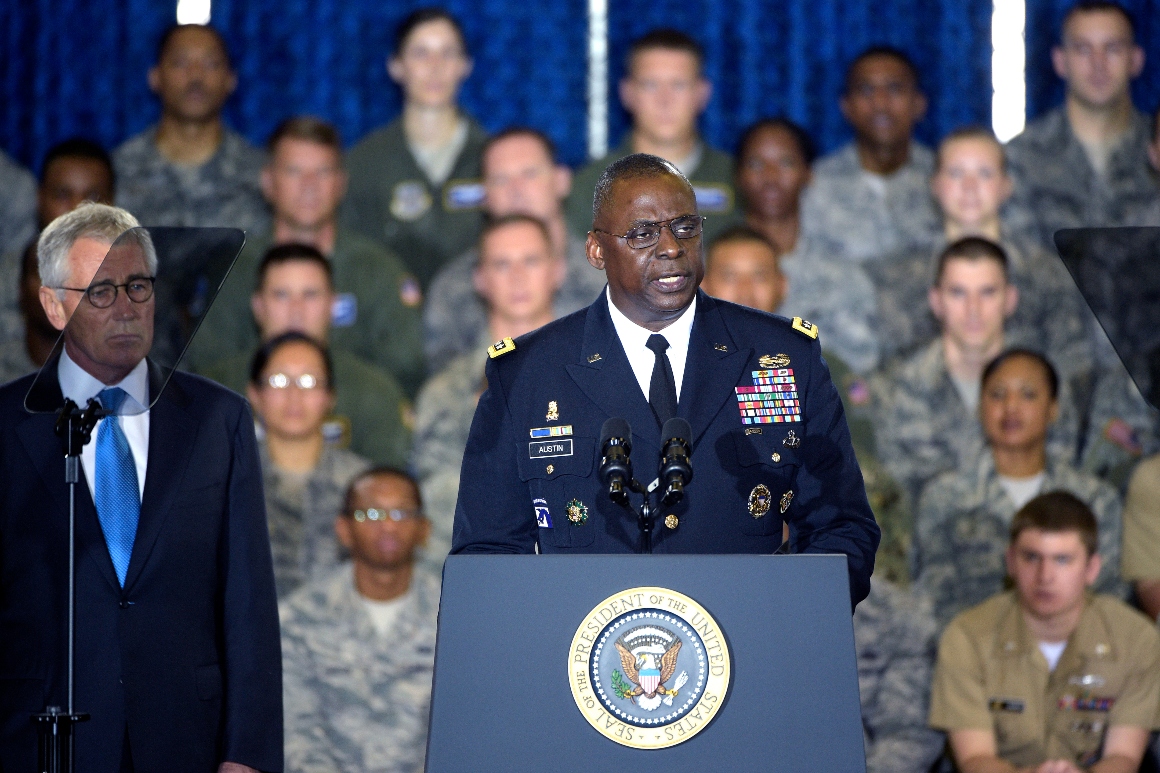 Already, Biden’s transition team has appointed at least four retired generals or admirals and a former top enlisted Marine. And POLITICO reported on Monday that retired Gen. Lloyd Austin is his pick to be the next Defense secretary.

The concerns reflect the difficulty Biden’s team will encounter as it tries to live up to the standard Democrats set during their four years of Trump criticism. Even if Biden is not eschewing norms the way Trump did, his team’s choices will be scrutinized for any evidence the incoming president is straying from the traditions he has pledged to uphold.

“I think it’s one more example of the pernicious trend of civilians taking shelter behind the legitimacy of uniforms,” said Kori Schake, director of foreign and defense policy studies at the conservative American Enterprise Institute who has worked in the Pentagon, State Department and on the National Security Council. “The civilians on his defense team deserve more confidence from him than this portrays.”

A Biden transition official insisted that, unlike in past transitions, the roles are not meant to be political. Individuals “were chosen because they are well-respected in their fields and, in many cases, for their extensive experience in the federal agencies they will now help review for the incoming Biden-Harris administration,” said the official, who agreed to respond to questions only anonymously.

It is logical, the official added, that some defense and intelligence experts will have military backgrounds.

But the civil-military balance is an acute topic of debate in military circles and among scholars who specialize in the tradition of civilian control of the armed forces and the military’s deeply-held professional commitment to remain apolitical.

Trump appointed an unusually high number of retired generals to top civilian posts, including the secretary of defense, secretary of homeland security, national security adviser and several positions on the White House’s National Security Council, as well as White House chief of staff.

The president has also been roundly criticized for politicizing the military. He short-circuited the military justice system with pardons, threatened to use active-duty troops to respond to protesters demonstrating for racial equality and siphoned off billions from the Pentagon budget to build his barrier along the U.S.-Mexico border. Trump also repeatedly referred to his military leaders as “my generals” and frequently bashed political opponents while speaking to military audiences.

The Biden team made a point of addressing the issue in the Democratic Party platform, pledging to restore balance.

The platform said Democrats would “end the Trump Administration’s politicization of the armed forces and distortion of civilian and military roles in decision-making.”

But in one major respect the president-elect is so far not following his own advice, say multiple retired officers and scholars: he’s using too many retired generals in his political operation.

A recent trend of retired generals endorsing political candidates has emerged in both parties, which have tried to outdo each other with competing rosters of former senior officers supporting their candidate.

Hundreds of prominent former military commanders publicly endorsed Biden during the campaign and others lent their support to Trump.

“I think it’s problematic when you ask retired military to sign endorsement letters supporting this candidate or that candidate,” said Peter Feaver, a former National Security Council official in the George W. Bush Administration and scholar on civil-military relations at Duke University. “They are trading on the nonpolitical status of the military institution to make that endorsement.”

He said what’s worse is they now commonly attack the opposing side, so it is “not just anodyne endorsements but actually lead[ing] the partisan attack on the other candidate. That’s especially problematic.”

Among Biden’s major supporters are retired Gen. Stanley McChrystal, the former top commander in Afghanistan, and retired Adm. Bill McRaven, who oversaw the raid that killed Osama bin Laden. Both have criticized Trump and played advisory roles on the Biden campaign. And they have briefed the president-elect in recent days.

But the news that Austin, who also briefed Biden recently, will be his secretary of defense will raise additional concerns.

Like Mattis, the four-star Austin, who left the Army in 2016, will require a waiver from Congress due to the law that prohibits retired officers from serving as secretary of defense for at least seven years after they leave the service.

Mattis, who served as Trump’s first Pentagon chief, was the first retired general to be granted such a waiver since George Marshall in 1950.

“The law was put in place to make sure there was a separation between the civil and military authority,” said Charles Allen, a retired Army colonel and scholar on civil-military relations at the Army War College. “You want to have the military to have autonomy, but also to be subordinate to civilian authority as prescribed in the U.S. Constitution and by law, and not supplant it.”

He added: “If you bring in a person with a military background, they are very informed by the culture that exists within their service. Their worldview and how they go about solving problems may be more restrictive than if they were from another civilian or outside agency.”

Feaver also said that four years ago, Mattis was widely viewed as a necessary exception due to the concern that Trump and his team were inexperienced and the revered retired Marine would provide some stability. But the circumstances are different now.

“What I found distressing about Austin,” Feaver said in an interview, “is that everybody understood it was problematic to issue the waiver for Mattis. But it made sense to do so given the extraordinary situation. We are supposed to be in a return to normalcy.”

But some also fear the Biden transition team is taking things in a new and potentially damaging direction by bringing on so many retired senior military officers at this early stage to take on traditionally civilian tasks.

“The really unusual thing was how prominent senior retired military were in the landing teams,” said Feaver, referring to the “agency review teams” that were established after the election to manage the handoff at federal agencies.

“That is a very political post and almost always is done by civilian political people,” he said at a recent discussion on civil-military relations hosted by the University of Texas at Austin. “The Biden team used quite a large number of senior military on those landing teams. I winced a little.”

One of the most prominent on the Pentagon transition team is retired Navy Adm. Michelle Howard, a former vice chief of naval operations who is listed only as a professor at George Washington University. She has also been mentioned as a possible candidate to serve as Navy secretary, the service’s top civilian.

The Pentagon transition team also includes John Estrada, a former ambassador who previously served as sergeant major of the Marine Corps, the branch’s top noncommissioned officer. He is listed on Biden’s website only as a retired State Department official.

Another member of the transition team is the “self-employed” Karen Gibson. The Biden announcement doesn’t note that Gibson retired this year from the Army as a three-star general who last served as deputy director of national intelligence.

Gibson is also pulling double duty as a member of the agency review team for the intelligence community, which is overseeing the Biden transition for the nation’s spy agencies.

And that team is co-chaired by Vincent Stewart, a retired Marine Corps three-star who ran the Defense Intelligence Agency and is also reportedly on the short list to be Biden’s CIA director.

If this trajectory continues it could have a detrimental effect on the military’s ethical standing, said Marybeth Ulrich, a retired Air Force colonel who specializes in civil-military relations.

“You don’t want people lobbying for these jobs — still on active duty or even retired,” she said. Or for the presidential candidates or their campaigns signaling to the senior officer ranks that “you give me your support now, I give you a job.”

If the generals agree even implicitly to such an arrangement, she believes, “You would be trading on your profession.”

Others worry it may already be too late.

“I think that whatever norm there might have been about retired or even active-duty people not seeming to render opinions about policy matters, I think that’s dead,” said retired Maj. Gen. Charles Dunlap, a former deputy judge advocate general of the Air Force.

But Ulrich, who now teaches at the Air Force Academy, believes that civilian and even some military leaders must appreciate more fully why limiting the role of retired generals in democratic government matters.

In her view, senior military officers still have a responsibility to adhere to the profession’s nonpartisan principles when they retire and remain bound by their professional ethics in civilian life.

Ulrich said she will be looking to see if Biden follows Trump in appointing multiple generals to top civilian posts, not just in the Pentagon or intelligence agencies but elsewhere in the government. Her advice for the incoming team: “Be careful of the numbers.”

“It’s a bad sign in another country if you assign generals to do things that aren’t even national security-related. Like to run some other department,” she said, citing the example of retired Gen. John Kelly, who was Trump’s White House chief of staff. “That’s what happens in military governments.”

“It’s something we ought to pay attention to and watch it to make sure things don’t get too far out of kilter so the balance is broken,” added the Army War College’s Allen. “For me I think the concern is you want to have unchallenged civilian control of the military. You want the military to be subordinate to civilian authority and not supplant it.”